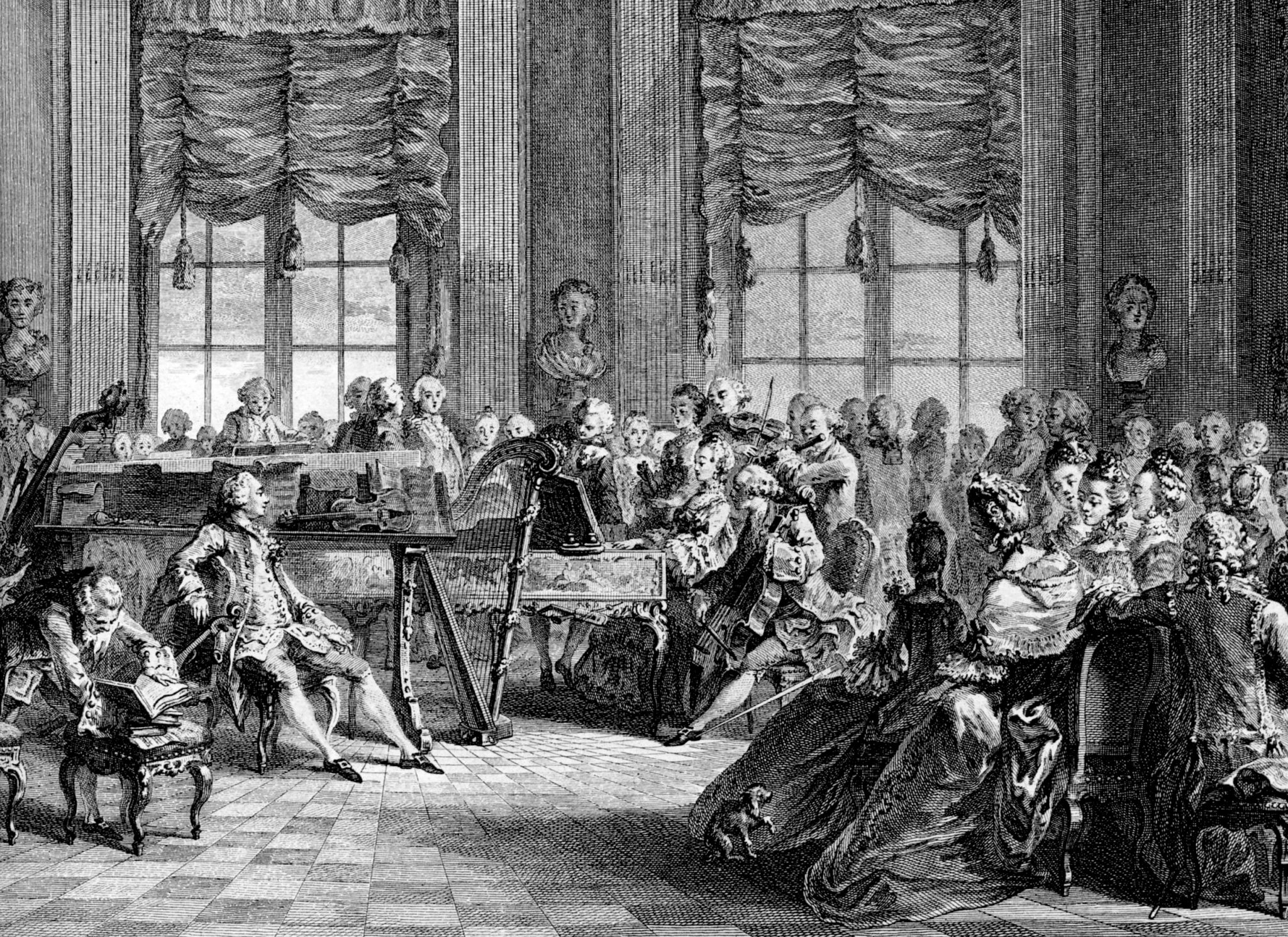 [blockquote text=”I have never met with true sociability except in Frenchmen; they alone know how to jest, and it is rare, delicate, refined jesting, which animates conversation and makes society charming.

When Goethe observed, at the very end of the 18th century, that music in the new genre of the string quartet developed like a conversation between four civilized persons, he was not being particularly original. The art of conversation had been cultivated for more than a century in the salons of Paris by people who gathered to discourse, in a tone that blended seriousness and lightheartedness, on politics, the powers of art, love, the conditions for happiness… in short, on everything. French composers soon noticed the resemblance between conversation and music, and began writing numerous chamber works in which they transposed the spirit of the salon into discourse between two, three, or four instruments, thus extending the galant spirit to music.

Thus, in 1733, Alexandre de Villeneuve published his Conversations en manière de Sonates for two violins without bass, a work that Lionel de La Laurencie described, in his L’École française du violon, as “elegant talk between witty and cultivated people.” Then, in 1743 and 1756, Louis-Gabriel Guillemain published two collections entitled Sonates en quatuors ou conversations galantes et amusantes. The similarity between conversation and music was clearly established. But exactly which components of the former are found in music? Let’s listen to what the philosophers have to say.

First, according to Montesquieu, “the essence of witty conversation consists of short arguments and counterarguments.” Thus we should not look for anything very learned or elaborate; wit’s special charm lies in the brevity of ideas and themes, and in the sparkle of their contrast or sweet silliness.

On the other hand, for talk to flow freely, the talkers have to be on an equal footing for, as Helvétius said, “the higher in rank the conversationalist the more boring the conversation.” Like Villeneuve’s, Jean-Marie Leclair’s twelve sonatas for two violins without bass, published in two volumes in 1730 and around 1747, illustrate this maxim perfectly. In turn, each of the two partners introduces a new subject while the other accompanies, as if supporting or refining the argument. Both partners agree wholeheartedly; differences of opinion are rare…

As well, French composers often assured equality in their sonatas for three or four instruments by assigning a solo line to the viola da gamba (or cello) rather than simply having it double the left hand of the harpsichord, leaving the latter to play the basso continuo alone. The Sonates à quatre parties which Jean-Baptiste Quentin le Jeune, violinist at the Opéra, published around 1735, furnish good examples. With the same concern for equality, Guillemain required that his Conversations galantes be played by one instrument per part rather than, as sometimes happened, having two or three instruments together play each melodic line, creating the collective sound known as en symphonie; and, anticipating the spirit of the string quartet, Guillemain made each line equally important.

More than ever before, each part in all these duos, sonatas, and quartets was written for the capabilities of a specific instrument, thus making any replacement impossible. According to Telemann, who published his two books of Parisian quartets in Paris in 1733 and 1738, this customization was the prime source of the enjoyment musicians took in playing their parts. They shone through a process of mutual aid; by displaying their individual talents especially when, through contrasts, their partners drew attention to them, they realized La Bruyère’s dictum that “the art of conversation lies less in displaying wit ourselves than in drawing it out of others.”

In the six quartets that François-André Danican Philidor published under the title L’Art de la modulation in 1755, the bass string instrument returned to the job of providing the foundation of the music. In galant turns of phrase that anticipate classicism, the flute dialogues with two violins which, acting as a team in the spirit of a concerto, mutually support each other. In fact, after the 1720s, the concertos that French composers wrote were influenced, far more than their chamber music, by Italian models, and particularly by the Vivaldian ritornello concerto. In this form — to continue the conversational analogy — a group or people proposes a subject of conversation or debate to someone they deem expert, who then discourses before them. From time to time, if the soloist wanders off topic, the group intervenes to restore order and return the discourse to its original subject… Gabriel Buffardin’s concerto for flute in E minor was probably premiered in 1726 at the Concert spirituel. This concerto and a flute sonata are all that remain to us of the works of Buffardin, who was Quantz’s teacher in Dresden.

Voltaire warned us about clichés and formulae: “There can be a lack of control in conversation, so everything becomes commonplace.” In the innumerable works penned by great and minor masters of the 18th century there is clearly much repetition, and some redundancy, but it is also clear that by stimulating the development of form, and by virtue of their ingenuity and perfection of construction, these works are significant milestones in the history of chamber music.

And as to galanterie, Montesquieu’s judgement is quite severe: “This general desire to please produces gallantry, which is not all love, but delicacy, lightness, the perpetual evasions of love…” One can justifiably deplore the shallow superficiality of galant discourse in music.

However, a century after Montesquieu, Nietzsche regretted that the utilitarianism of the industrial revolution had wiped out this very special art of conversation. According to him, we have to learn afresh to waste time wittily with others, to rediscover the pleasures of intelligence and the intelligence of pleasure. And this is exactly what the musicians of the Boréades propose to do with us this evening.