Here are two concerts for the price of one! We are indeed invited by Suzie LeBlanc and Les Boréades to two very different evenings from the eighteenth century. 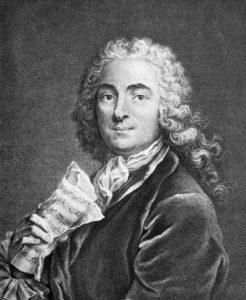 The first transports us to a Parisian salon circa 1730, belonging to none other than Joseph Bonnier de la Mosson. As chief treasurer of the Languedoc States, he collected quite a fortune throughout his life. He was both bibliophile and amateur of arts and science, and he assembled an impressive curiosity cabinet, full of specimens of natural science, objects used for chemistry, pharmacy, physics and mechanics. Fortunately for us, he also loved music; he had an important musical library as well as lots of rare instruments: violins, harpsichords and chamber organs. He was also a patron to the first two composers in our program tonight; Jean-Marie Leclair and André Chéron.

Born in Lyon in 1697, Jean-Marie Leclair’s first goal was to be a dancer, but after studying with Giovanni Battista Somis, a student of Arcangelo Corelli, it was actually the violin that took over his heart. After going to Paris, Leclair published his first two collections of Sonates pour violon avec la basse continue (sonatas for violin and basso continuo) in 1723 and 1728, which he dedicated to Joseph Bonnier de la Mosson. He was soon heard regularly at the Concert spirituel, where he was greatly appreciated for his compositions as well as for his playing, and it did not take long before he was a chosen violon du roi (king’s violin). In 1737 however, he decided to retreat for some time to the Netherlands. It was never known whether it was because of his prickly nature, his difficulty to deal with rivals, or maybe another unknown reason. Towards the end of his life, Leclair was a man plagued with melancholy and misanthropy, living in the outskirts of Paris without his wife, and he could often be found at places of bad reputation. In October of 1764, he was killed by a stranger, still unknown today, in his own home.

Leclair was not a fan of gratuitous virtuosity. He left behind a few pieces, almost exclusively instrumental, always elegant, ingenious and serious. Compared to his two violin sonatas, very inspired by Vivaldi and Locatelli, his two Récréations en musique (Recess in music), published in 1737 and supposedly “easy to execute” – as indicated on the front cover – respect a way more classic French form: vast trio suites preceded by an overture in a Lully style and accompanied by long and majestic chaconnes.

André Chéron, on the other side, was much less known. He was born in Paris in 1695 in a family of musicians. He first studied with Nicolas Bernier at the Sainte-Chapelle, and later focused his career on the organ and the harpsichord – he even gave counterpoint lessons to his friend Leclair. He caught Bonnier de la Mosson’s attention in 1729, and in 1734 he was hired as harpsichordist for the Opera, of which he would be the conductor five years later. We know he composed cantatas and motets, but the only pieces that survived are his Sonates en trio opus 1 (trio sonatas opus 1) and his Sonates en duo et en trio opus 2 (duet and trio sonatas opus 2), which were both dedicated to Bonnier de la Mosson. Chéron mostly composed in the Italian form with four movements, but also manages to adapt Corelli’s style to typical French dances, in a very successful “reunion of tastes”.

Cantatas were very much the trend in the Parisian salons at the beginning of the eighteenth century. Nicolas Clérambault’s piece about the happy episode of Orpheus’s story was one of the most popular ones. Born in Paris in 1679, also in a family of musicians, Clérambeault worked as an organist in many churches, including the Grands-Jacobins, Saint-Sulpice, and the royal house of Saint-Cyr, where he was protected by Madame de Maintenon. Even though his instrument was the organ, he wrote very few pieces for it, composing mainly motets and about 25 cantatas, published in five books from 1710 to 1726. Those books were what made him famous.

The Orpheus cantata was published in 1710. It tells the story of a mythical musician, whose powers could tame men, animals, gods, and even rocks and plants. He found a beautiful wife, Eurydice, but shortly after their marriage, she was killed by a snake bite. Orpheus, with his lyre as only weapon, descended into Hell in order to retrieve her. With his music, he convinced Pluto to let her come back to the world of the living with him. Clérambault chose to only tell about the happy part of Orpheus’s story, ending the piece right before our hero turned around to look at Eurydice as they made their way back, failing to obey Pluto’s only condition, and thus losing his wife forever. This choice was probably a way for him to celebrate the power of the art of sounds.

Orpheus became one of the repertoire’s most dramatic cantatas, and was considered throughout the rest of the century as an example to follow. In Catherine Cessac’s opinion, it “has done more for Clérambault’s reputation than the rest of his works combined”. Its structure and harmony are most expressive, in addition to its form being very free. It also uses audacious dissonances; we can hear tonalities that were unusual at the time, for example by going from an F sharp major to a G sharp minor during the hero’s complaint.

Our second evening transports us all the way to Edinburg. Scotland has always been very proud of its musical heritage, which throughout the eighteenth century was mainly kept alive by street musicians. Far from being frowned upon, these dances and various melodies gave original melodic and rhythmic twists to English music. Composers such as James Oswald have crafted many popular Scottish melodies into the “classic” forms of their time. Oswald was born in Crail, Scotland, in 1710, and his first instrument was the cello, before working in Dunfermline as musician and dance master. After a short career in Edinburgh, he moved to London in 1741, where twenty years later he was named musician of George the Third upon his accession to the throne. He opened a music publishing house and printed significant collections of Scottish tunes, which he provided with variations.

Undeniably, the beautiful music of the inhabitants of the land of lakes, valleys and heather have fascinated many a stranger that stayed in the British Isles. Like their colleagues, they got a taste of the vitality of the locals’ traditional music, the poetic nature of their melodies and the energy of the popular dances. They admired the skill of local musicians and were more than open to this unfamiliar music.

For example, there was Francesco Geminiani, born in Lucca in 1687. He was amongst the most important of Corelli’s students. After a series of concert in Italy, he set foot in London in 1714, and his reputation rapidly grew to one of a virtuoso and excellent educator, which gained him the favor of many aristocrats. His first stay in Dublin was in 1733, and it soon became his home, with him going back there after each of his travels to London and Paris. In 1749, Geminiani published A Treatise of Good Taste in the Art in Music, in which he presented several examples of Scottish pieces followed by his own variations. In the foreword, he defends this music against the accusations of “grumpy professors”, and honors David Rizzio, Mary Stuart’s private secretary, who two centuries before had given “the gallant spirit, unique to the Scottish people, to a music looked upon at first as brutish and barbaric”!

His colleague and friend, Francesco Barsanti, did the same, but in Scotland itself, publishing in Edinburgh in 1742 A Collection of Old Scots Tunes. Born in 1690, also in Lucca, Barsanti played the flute and the oboe. He arrived together with Geminiani in London in 1714. For a little while, he played in the orchestra accompanying Handel’s operas at the King’s Theatre in Haymarket. In 1738, he was hired by the Edinburgh Musical Society, and therefore gained the protection of Lady Charlotte Erskine, to whom he dedicated his “Old Scots Tunes”. The institution unfortunately soon faced financial difficulties, and Barsanti made his way back to the English capital in 1743.

At the end of the century, in 1793, the great Scottish poet Robert Burns, fearing that all these adaptations would negatively impact Scotland’s music, wrote a letter in which he demanded: “let [composers] not alter one iota of the original Scots air […] But, let our National Music preserve its native features”. He adds: “They are, I believe, frequently wild, and unreduceable to the more modern rules; but on that very eccentricity, perhaps, depends a great part of their effect”.

Joseph Haydn, on the other hand, only came to London after the death of his employer, Prince Nikolaus Esterhazy, upon the invitation of impresario Peter Salomon. His works were already widely popular in the English capital. He went twice, in 1791-1792 and 1794-1795, and both times were fruitful: he composed a dozen of symphonies, which he then directed with tremendous success. He also arranges – “The Harmony by Haydn” – almost 150 Scottish songs for voices, violin and piano. Although we do not know if Robert Burns liked them…

The musicians that have worked in the British Isles during the eighteenth century have tried a “reunion of tastes” of sorts, that was both serious and popular. Many of them have brought and cultivated the Italian baroque style, followed by the German classical, across the English Channel. And yet, they were still touched by the local music’s beauty.

The concert Paris-Édimbourg will be presented on Septembre 19, 2019 at the Salle de Concert du Conservatoire