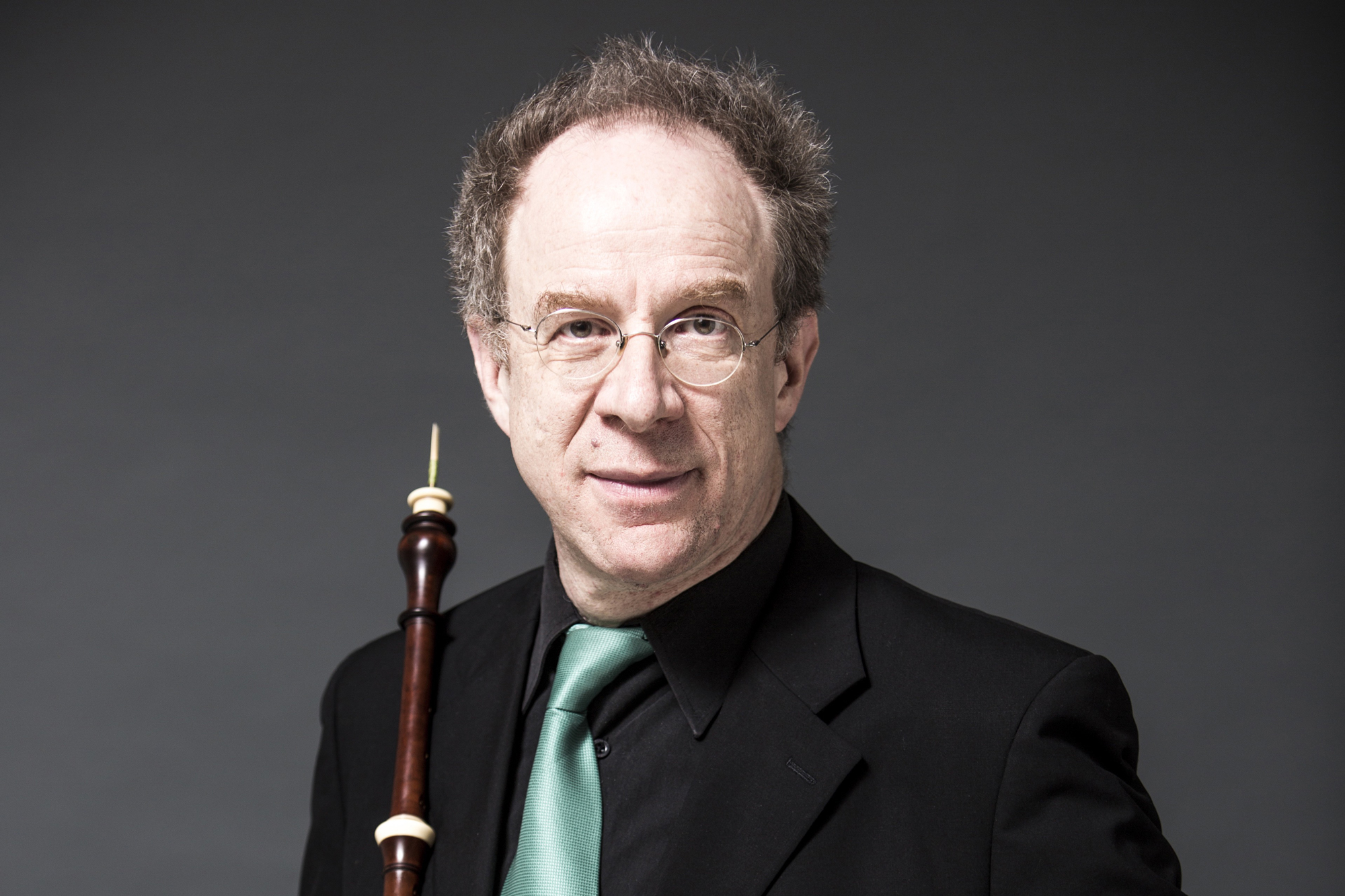 We are happy to share the program note for the  concert Per l’Oboe featuring Alfredo Bernardini that will be presented Frebruary 13th at the Salle de concert du Conservatoire.

[blockquote text=”The oboe, of which it can be said to nearly speak, is even friendlier when played correctly.

“Instruments similar to the oboe, with a reed mouthpiece, can be found in ancient civilisations from the Middle-East, Greece, Etruria and Rome, and they were called aulos or tibiæ.” 1

“Throughout many centuries, instrumental music has existed in the shadow of vocal music. As singing was the music cultivated and most favoured by the Church, it enjoyed a certain privileged status. Instruments were mainly seen as a means of accompaniement.”2 “[Because of its powerful sound, the ancestor of the] oboe, which began to gain popularity at the end of the medieval era, was used for court parties and popular entertainment. Up until the sixteenth century, [it] kept a very simple form; a conical wooden tube with a double reed mouth, six holes on the upper side, and a flared bell.”1

“The instrument’s maker, considering his skill and craftsmanship in the making of these musical instruments, received a similar lack of recognition. Wind instruments were often made on the side by chair leg turners, and none really considered that the craftsmanship of a recorder or a shalmey could be a masterpiece. […] But there is a change the moment we pass from the Renaissance period to the Baroque – the artist suddenly becomes self-aware, and identifies with the work they’ve created. […] Instruments are no longer a by-product of artisans working with horn or chair legs, and one now has to travel great distances to get their hands on a desired instrument. […] The first centres of instrument construction are born. Nuremberg came to the stage due to the population of wood workers living and working there, such as the Denner family, the Oberlenders, and the Löhners. Paris becomes an equally important sector. A catalog dating back to 1692 lists thirteen masters “for the playing and the making of recorders, flageolets, oboes, bassoons, musettes…”. Amsterdam and London were also home to a number of accomplished masters.” 2

“It is hard to say exactly when [what we now call] the oboe was invented. […] Its transformation was more a process of selection rather than a true invention. Nevertheless, the inventor of the oboe is often said to be Jean de Hotteterre, who died in 1691, along with members of the Philidor family, whom were hired as musicians for the Grande Écurie in 1650.”2 “Thanks to the transformations brought by French artisans, the instrument found its fundamental and final three-section structure. Seducing through its bright sonority and rich tones, it lent itself particularly well to pastoral atmospheres, and musicians at Louis XIV’s Court introduced the oboe to their orchestra.” 1 “In the German capitals, there was no delay in the interest it sparked for that type of construction. French musicians were hired to play in court orchestras and train their German colleagues.” 2

“A growing number of keys were added during the next century, and many composers gave the instrument solo roles, putting the focus on its penetrating tone and its ability to reach a touching tenderness as well as intense expression, especially in the medium register. Its great musicality allowed it to play a fundamental role in the music of the baroque era. […] Other instruments with a lower register can also be found in the same family – the oboe d’amore, with a soft and suave sound, and the oboe da caccia (incorrectly called the English horn), for which Bach composed a number of cantatas.” 1

From the very beginning of the eighteenth century, composers from all over Europe used the oboe as a solo instrument in pieces ranging from concertos to chamber music. Many editions of trio sonatas intended the upper instruments to be used in a way that was more or less interchangeable, but the oboe quickly received specific parts of its own. It soon became an integral part in the orchestra, no longer content to just back up the violins. This phenomenon sprang forth from opera theatres, even before the existence of the “symphony” orchestra, by adding two oboes and two horns to the ensemble of strings– the distribution of the early symphonies of Haydn and Mozart. 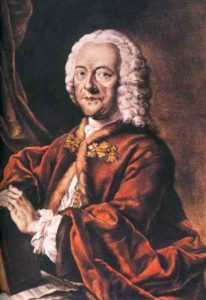 Georg Philipp Telemann honored all his contemporary instruments. He wrote in one of his autobiographies that he very quickly learned to play “the violin and recorder, the oboe, the flute, the chalumeau, the viola de gamba, and even the double bass and bass trombone, in addition to keyboard instruments”. Knowing this, it’s no surprise that his countless compositions perfectly exploited each and every instrument’s unique capabilities! His Tafelmusik, an ensemble of three large volumes published in 1733, showcases some of his most beautiful instrumental music, using all possible combinations from sonatas to orchestral suites. The oboe plays important roles, notably in the remarkable Quartet for Flute, Oboe, Violin and Continuo in G major from the first volume, with its first two movements opposing two different tempos. The instruments of course share a theme, but each one also develops its own individual motifs. Telemann aims to give “to each instrument what suits it”, so that all can enjoy it. It is probably why he so valued the quartet – it was a new genre, not as rigid as the trio, that presented more freedom.

Johann Friedrich Fasch is one of the most interesting German composers of the first half of the eighteenth century. A student of Johann Kuhnau’s in Leipzig and a great admirer of Telemann, after a visit to Dresden he ended up serving the court of Zerbst forever after. He composed numerous instrumental piece where the woodwinds were given choice roles, arranged with a vivid sense of colour. His production, however, was unknown during its own time, and is hard to date precisely. In his Quadro for Recorder, Oboe, Violin and Basso Continuo in B flat major, traces of Corelli’s work can be found, such as in the fugued second movement, a more modern turn on his Grave, which plays out a light and hazy atmosphere.

Even if the flute was especially prized at the Prussian Court – let’s not forget Frederic II himself played it brilliantly – Berlin’s established musicians did not neglect the oboe. Johann Gottlieb Janitsch, double bassist in the Court’s orchestra and an important member of Berlin’s musical scene with his popular Friday Academies, gives it a shining role in the many Quadro sonatas he left us – after 1750, they followed the Berlin school of thought through use of the three movement format. “Their melodic invention is remarkable due to its variety and lightness”, in the words of Christopher Palameta, and we can find characteristics of the new, gallant style alongside points of expressions inspired by the Empfindsamkeit.

Christoph Schaffrath and Johann Philipp Kirnberger also belonged to the Berlin school of thought. The former played the harpsichord for the Court orchestra, and the latter was a musician at the service of Frederic II’s sister princess Anna-Amalia, a knowledgeable lover of music and part-time composer herself. Composed in 1760, Schaffrath’s Trio Sonata for Violin, Oboe and Basso Continuo in G minor throws back to an already dated style. However, its magnitude is uncommon: the first movement, very developed and full of imitations motifs, is followed by a thoughtful Largo in major, before tensing up again in the final Presto. Johann Philipp Kirnberger, one of Bach’s former students in Leipzig, was essentially a theoretician; while he did not leave us with abundant works, he did compose 4 sonatas for flute and continuo, as well as a Sonata for Oboe and Basso Continuo in B flat major in 1769. Still well anchored to the baroque form, it ends in a gallant spirit with a minuet and variations, something often observed in the works of his friend, Carl Philipp Emmanuel Bach. Nonetheless, as archaic as it may be, it is truly charming…