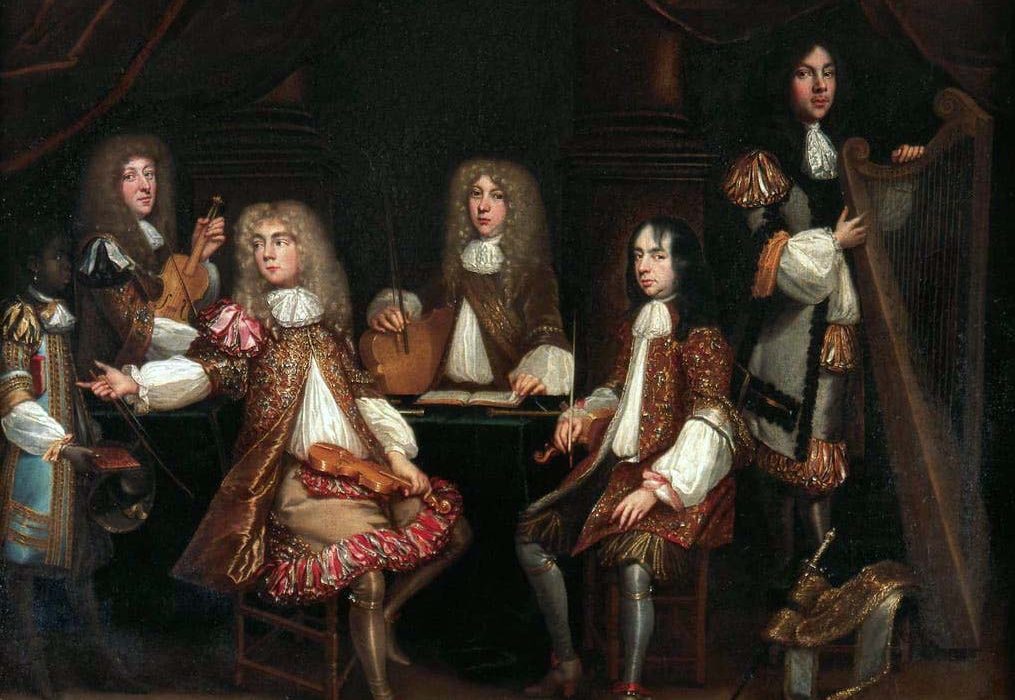 Thence Swan and I to a drinking-house near Temple Bar, where while he wrote I played on my flageolet till a dish of poached eggs was got ready for us. 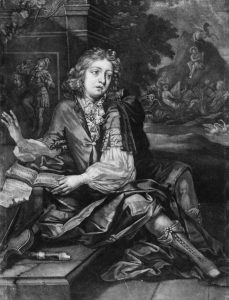 Elizabeth I stunned many when, on her deathbed in 1603, she chose as her successor James VI, King of Scotland and son to Mary Stuart. Under the name of James I, he inaugurated the successive reigns of the House of Stuart. Ending in 1714, therefore having spanned the entire 17th century, this period ranks among the most troubled times in English history. The Virgin Queen had managed to maintain a balance between the kingdom’s sundry political factions, but James I and his successors proved thirsty for absolute power, inspired as they were by the customs and policies of the French court. They were in constant conflict with Parliament, which opposed as best it could the will of the King and gave a voice to the Puritans. Then, after several years of civil war, Oliver Cromwell established the Commonwealth, and his partisans had Charles I beheaded in 1649. When the monarchy was restored in 1661, Charles II, “the Merry Monarch,” took Louis XIV as his model. Afterwards, James II, who had remained a Catholic, was overthrown by William of Orange and his wife, Queen Mary, daughter of Charles I. Finally, the reign of Queen Anne, inaugurated in 1702, carried on quite peaceably until her death in 1714, when the House of Hanover took over the throne. 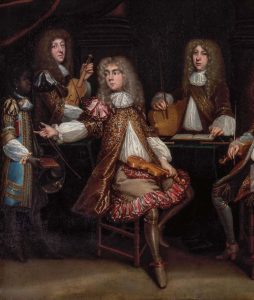 Music, of course, was an integral part of courtly pomp and merriment, but increasingly, music as practiced in private by the nobility as well as by a growing number of amateurs drew upon the creative resources of composers. It was long believed that the austere fury of the Puritans had completely stifled musical and artistic endeavor during the Commonwealth. Indeed, amidst all manner of restrictions, church organs, associated with Babylonian splendors, were destroyed, and the theatres were closed, while in church, simple hymns replaced learned music. This situation prompted Charles Burney to write, a century later: “Ten years of a gloomy silence seem to have elapsed before a string was suffered to vibrate, or a pipe to breathe aloud, in the kingdom.”

The truth, however, is somewhat more complex. Music, far from being hushed, sought refuge in the dwelling place, among families and friendly gatherings; as Roger North noted, it was practiced “in private society, for many chose rather to fiddle at home, than to go out and be knocked on the head abroad.” This domestic exile was actually a great boon to chamber music. People sang, and people played the virginal, the lute, the recorder—or that flageolet so dear to Samuel Pepys—and the viola da gamba. When Charles II came to power, the resumption of scenic and musical activities as well as the establishment of public concerts in no way altered the fervor of music lovers for domestic music.

Thence to my Lord Bellasyse by invitation […]; and at dinner there played to us a young boy lately come from France, where he had been learning a year or two on the violin, and plays finely. But impartially, I do not find any
goodness in their ayres (though very good) beyond ours, when played by the same hand. […] But
it was pretty to see how passionately my Lord’s daughter loves music, the most that ever I saw creature in my life.

English musical taste was also constantly changing: owing to travels and commercial exchange, to several musicians’ mainland sojourns and the arrival of foreign virtuosos, the most recent Italian and French trends were imported. The viol consort, whose predominance had started to assert itself almost a century before, was gradually being replaced by the sonata, the dance suite, the thorough bass, and by a more modern but somewhat disdained instrument, the violin. However, neither in instrumental nor in vocal music did national identity dispense with the rich heritage of the Renaissance. Thus, the polyphonic fantasia was to be found in Matthew Locke’s suites, while the sonatas in three and four parts by Henry Purcell show a greater contrapuntal complexity than their Italian models. 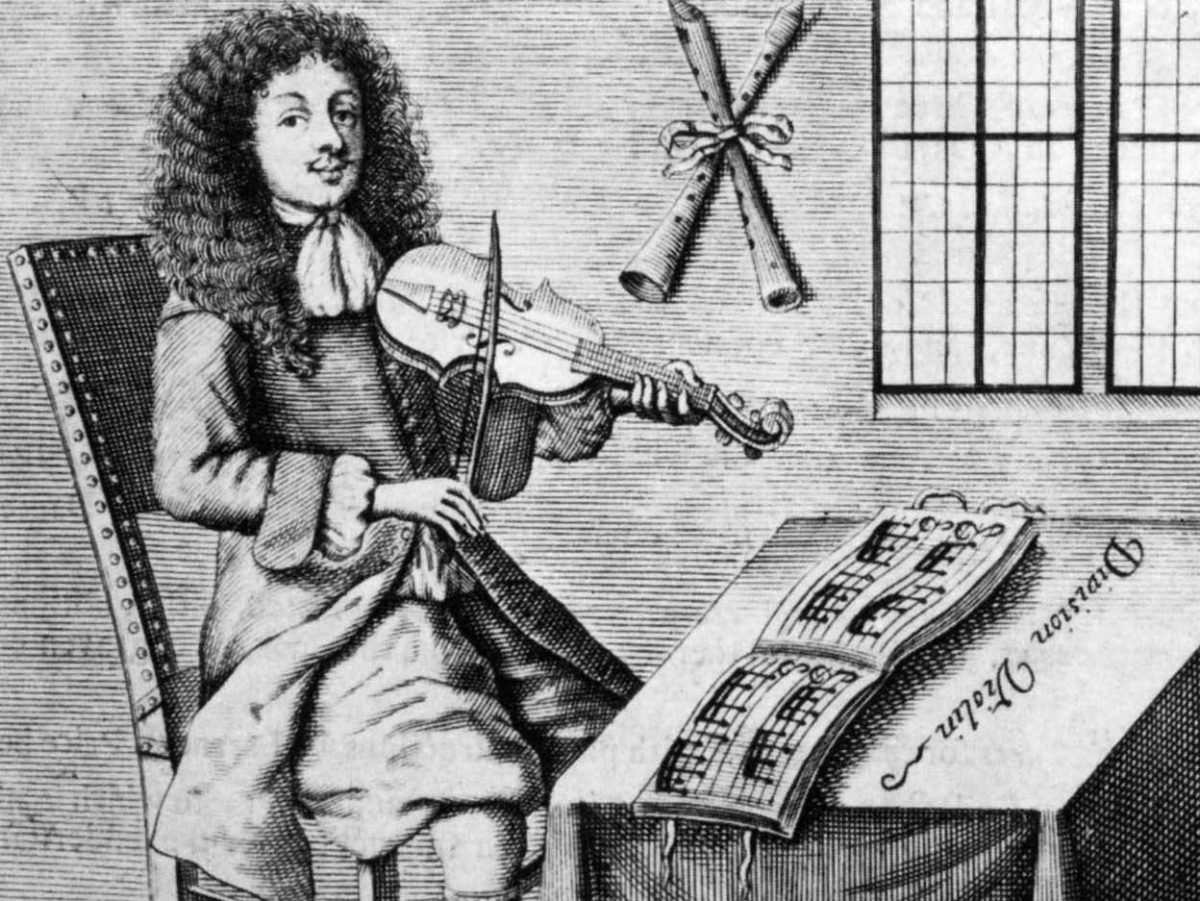 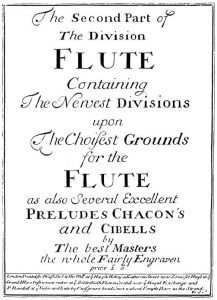 Private music making also proved helpful to the emergence of music publishing, and the Playford family published from 1650 to beyond the end of the century many collections of airs, dances, and songs, as well as treatises on improvisation which taught amateurs the art of division. Typically English, this technique is close to that of the chaconne, presenting variations using short note values upon a ground, an indefinitely repeated bass motif. 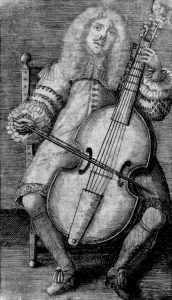 Musicians of great merit gave the century many compositions, illustrating all instrumental forms. His entire life in the private service of the Bolles family and last great proponent of the viola da gamba in England, Christopher Simpson left several performance treatises for his instrument. The most important, The Division Viol, or the Art of Playing Upon a Ground, first published in 1659, with a second edition in 1667, includes a good number of his extant compositions. 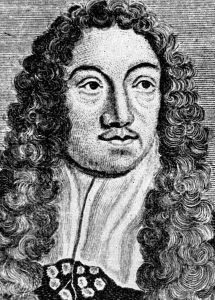 A composer in 1661 to the Private Musick—royal institution which comprised small vocal and instrumental ensembles—of Charles II and organist to the Queen’s Catholic Chapel, Matthew Locke left many scenic and religious works, as well as viol consorts, the last before those by Purcell, which took on the form of the suite. John Blow was also attached to Charles II’s Private Musick, starting in 1674, while simultaneously holding the positions of organist at Westminster Abbey and Master of the Choristers at the new Saint Paul’s Cathedral. Blow composed mostly religious works, but he also wrote harpsichord pieces and two four-part sonatas which remained in manuscript form. 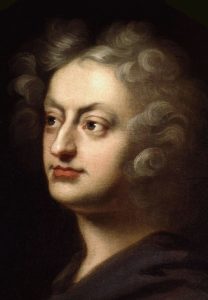 As of 1677, Henry Purcell was composer to the violins of the Chapel Royal and became a member of the Private Musick of William of Orange, among other functions. His instrumental works include fantasias for viols, harpsichord pieces, and sonatas in three and four parts published in two sets, the second issued posthumously by his widow. These sonatas have no fixed form, the number of their movements varies, and one of them consists of a single and masterly chaconne. By their harmonic and contrapuntal procedures, they transform the Italian mold and propose a thoroughly English intimacy of expression. 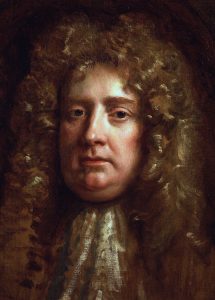 Moravian-born Godfrey Finger was among the many foreign musicians that made London their home base. Having joined the Chapel Royal in 1685 before becoming an independent musician following the exile of James II, his works perfectly illustrate that style of chamber music inspired by Corelli that was to become truly international by the dawn of the 18th century.

Although the 17th century appeared to some as a period of decline after the great Elizabethan era, it was not without merit. After a few decades of transition, corresponding to the reign of James I, English music attuned to the new forms imported from the mainland, and developed a variegated and remarkable corpus of chamber music, adapting the spirit of the Baroque to the British temperament.

The Private Musick concert will be presented on November 3, 2022 at 7:30 p.m. in the Salle de concert du Conservatoire.