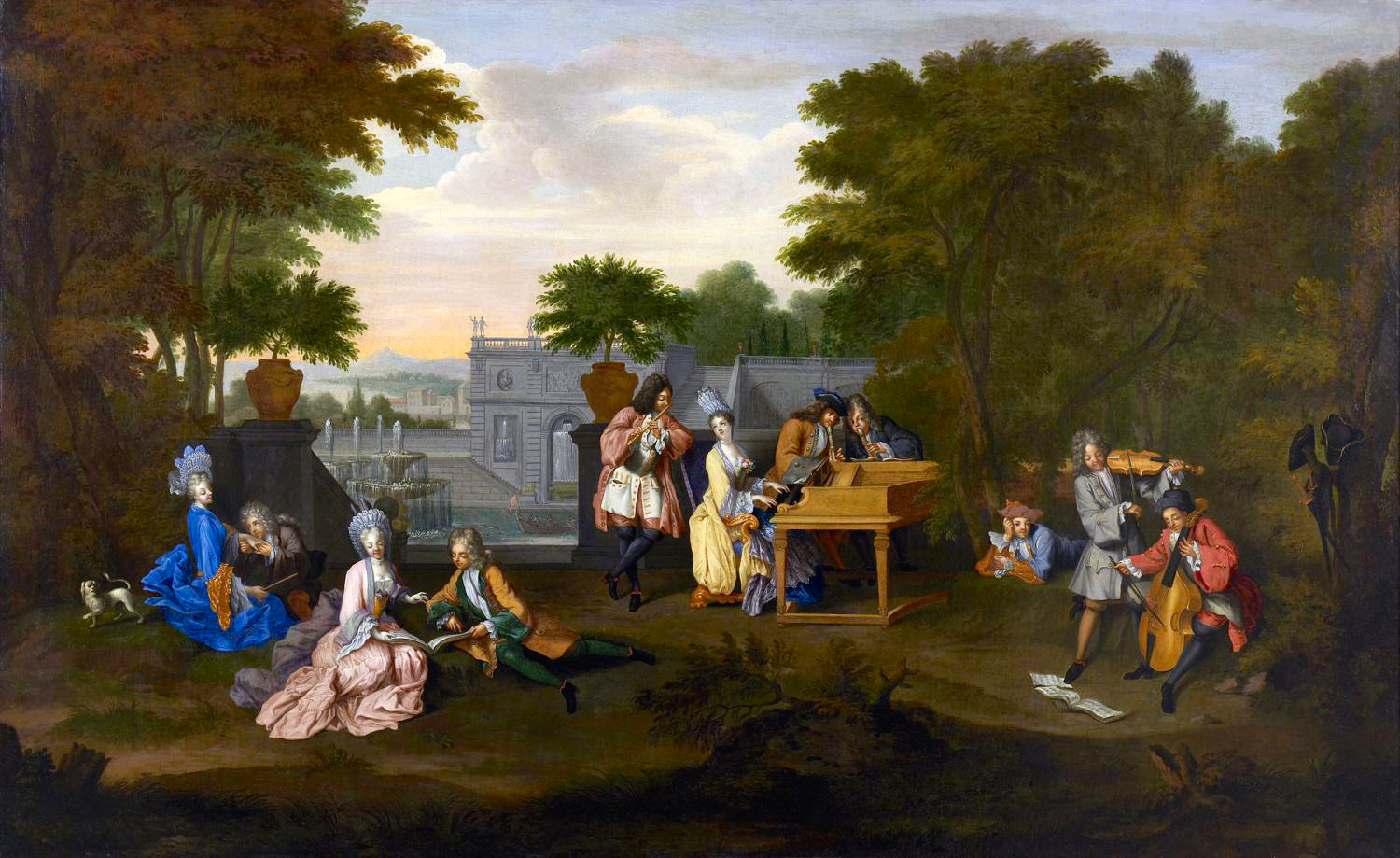 Unlike Italy and the Germanic countries, which had a myriad of capitals and artistic centres until the 19th century, France established its political unity very early on, under the impetus of Richelieu and then Louis XIV. As a consequence, the arts and music were, from about 1660, centralized and put at the service of an absolute monarchic conception. It was from Versailles, where he officially established himself in 1682, that the Sun King governed the kingdom. This palace, as well as the city that is slowly being built around it, is located not far from Paris. Thus, the artists, writers and musicians who will make the greatness of the century are shared between the capital and Versailles. They had a residence in the city and very often a position at the Court: they were musicians of the Chamber, of the Chapel or of the Great Stable. 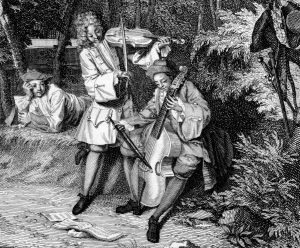 In addition to his own glory, Louis XIV had three passions: women, buildings and music. During the last twenty-five years or so of his interminable reign, the first two faded, one because of age and the spirit of devotion imposed on the Court by Madame de Maintenon, his morganatic wife, the other because of the wars and the great economic difficulties that afflicted the kingdom. Music, which he had studied in his youth, comforted him until his last days, which were afflicted by terrible health problems. He loved his musicians, talked with them willingly and chose them carefully: he followed Delalande’s work at the Chapelle Royale, Robert de Visée played the guitar for him every evening “at nine o’clock”, Couperin wrote his Concerts Royaux for him, Marais was his favourite violinist, and he encouraged Élisabeth Jacquet, a child prodigy, from the time of her first compositions…

Born in Paris in 1668 into a family of musicians, François Couperin was for a time the organist at the Chapelle Royale in Versailles and taught harpsichord to several princes and princesses of the blood. A musician par excellence of intimacy, Couperin entrusted the harpsichord with an absolutely original poetic discourse; as Pierre Citron says, he found in the instrument “that alliance of precision and mystery which best suited his genius. Between 1713 and 1730, he published four books of various pieces, sometimes with enigmatic titles, and a pedagogical treatise, L’Art de toucher le clavecin. In order to make the instrument expressive, he foresees all the ornaments—they are like a golden powder between the musical lines—and gives very precise indications for the beautiful execution. It is by the term ‘ordre’ that, for reasons that remain mysterious, Couperin designates his suites of pieces for harpsichord, grouping together dances, portraits and character pieces that are in turn poetic, dreamy, lyrical or ironic.

Marin Marais, Louis XIV’s favourite violinist, was born in Paris in 1656 to a father who was a shoemaker. He began as an altar boy at the church of Saint-Germain-l’Auxerrois, but seems to have taken up the study of the bass viol at an early age. His only teacher was briefly Jean de Sainte-Colombe. In 1676, he joined the orchestra of the Royal Academy of Music, becoming Jean-Baptiste Lully’s pupil for composition, and three years later he became ‘ordinary of the King’s Chamber for the viola’. It was at this time that he began to compose for his instrument, of which he was the most important representative. Marais is above all a poet: his sensitivity, rendered by the inflections of the song and perfectly transposed to his instrument, his restrained but always present emotion, his exoticism at times and his ingenuity full of tenderness in the evocation of characters put him on the same level as François Couperin.

Élisabeth Jacquet de La Guerre, nicknamed in her time ‘the wonder of our century’, was born in 1665 in Paris into a family of musicians. A child prodigy, she was quickly noticed by Louis XIV during concerts where she sang and played the harpsichord before the Court. The royal attention she received from a young age, she never ceased to point out to her admirers, dedicating all her publications, except one, to the Sun King. In 1685, she had a pastoral performed in the apartments of the Dauphin before the king, and the king requested several revivals of the work in the following days. Two years later, our musician published a first book of pieces for the harpsichord; the Mercure galant informs us that he received the work ‘with the obliging air that is usual for him’ and that he declared ‘that he had no doubt that [it] was perfectly beautiful. Élisabeth Jacquet married Marin de La Guerre in 1684, and, unable because of her sex to hold any position either at Court or in the Church, she led an independent career, making a living from her art and from teaching, thus setting the standard for the social status of musicians. 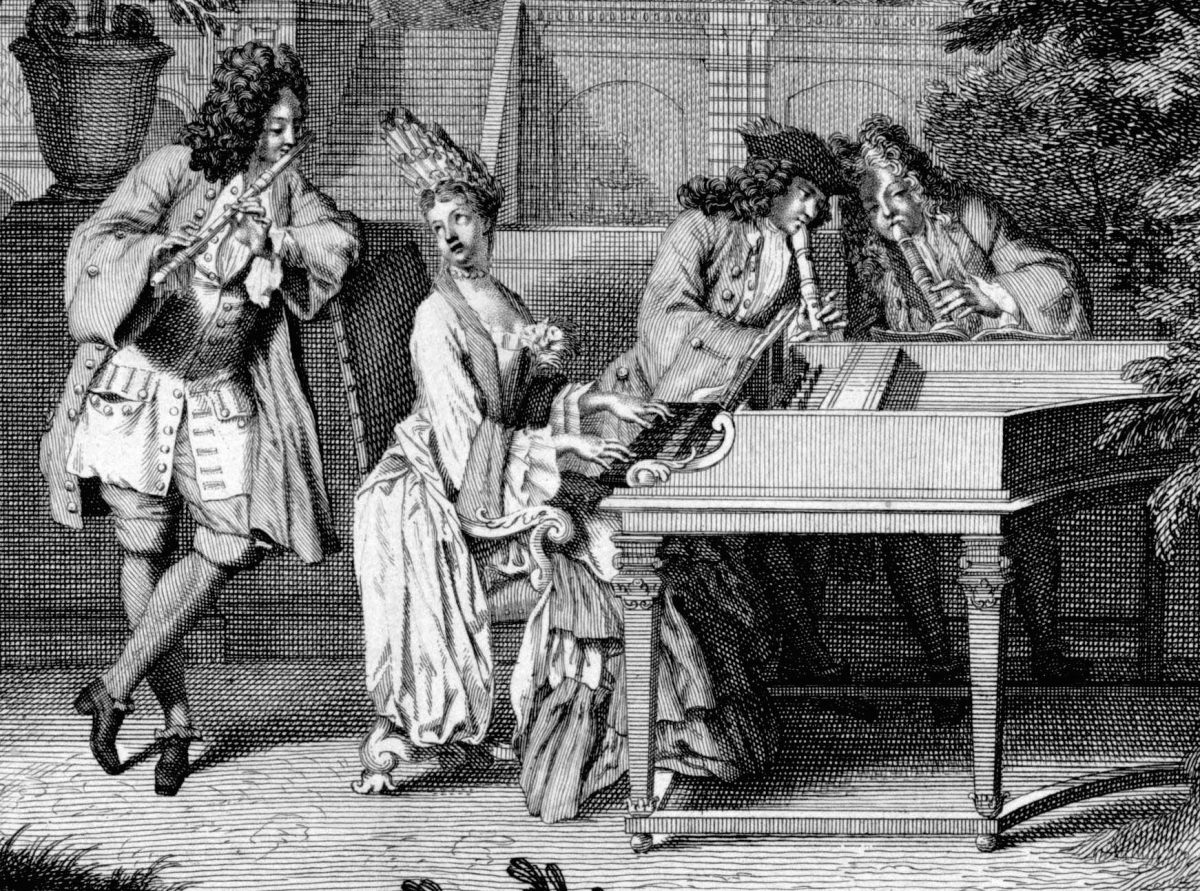 Anne Danican Philidor, also a member of a musical family, was born in Paris in 1681. He was an oboist and violinist at the Grande Écurie, the Chapelle and the Chambre. He composed little, reserving his activity for the position he held with his father, André Danican Philidor, at the King’s Music Library, which was responsible for collecting all the music composed in France since the reign of Henri IV. He was also director of the concerts of the Duchess of Maine and superintendent of the Music of the Prince of Conti. More importantly, in 1725 he founded the Concert spirituel, the first major public concert institution in Europe, which closed its doors during the Revolution.

Born around 1680, Jacques Hotteterre was one of the first virtuosos of the transverse flute, an instrument newly perfected by members of his own family. From a trip to Italy, where he was influenced by Corelli, he earned his nickname Le Romain. Oboist and bassoonist of the Grande Écurie, ordinary musician of the Chamber, he cultivated the sonata and the suite, but with a delicacy tinged with Italian harmonies. He published his Third Book in 1712 and dedicated it to the Duke of Orleans, who became regent of the kingdom upon the death of Louis XIV three years later.

Joseph Bodin de Boismortier belongs to the century of Louis XV. Born in Thionville, Lorraine, in 1689, he settled in Paris around 1723. No teacher is known to him, but it is known that he learned the violin and the flute at an early age, and the latter remained his favourite instrument. In Paris, his fertility and reputation were such that he never sought the protection of the great ones; he did not hold any official position, and he was one of the very few musicians of the 18th century to have been able to live, and to live well, it seems in his case, only thanks to the fruits of their pen. His work is very varied; besides a few cantatas and motets, Boismortier wrote for all possible combinations of instruments, as can be seen in pieces for two viols and sonatas for two bassoons, for three and five flutes without bass or “for a flute and a violin by chords without bass”—the violin accompanies the flute by playing double and triple chords.

The concert Jouvence pour un roi fatigué will be presented on April 10, 2022 at 3pm in the Conservatory Concert Hall.